What is a Bed of Suffering?

Part 6 in the Series: 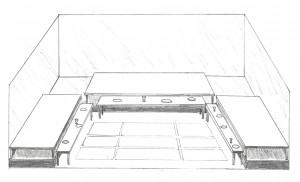 Last week, we examined the background to the words of Jesus that Jezebel influenced people to eat food sacrificed to idols, and saw a connection between pagan offerings, which were then sold in the marketplace, and the religious overtones associated with various banquets at which that food might be consumed. There is another detail in the message to Thyatira that links Jezebel to the banquets of ancient Rome. Jesus said that he would “cast her on a bed of suffering.” (Revelation 2:22)

The connection is not overtly obvious to modern readers, so a little background is in order. The Greek word is kline (pronounced kli-nay). Translating the word as “bed” is an indication of the traditional association of Jezebel with adultery. In fact, the word should actually be translated “couch.” While one could sleep on it, the more common use was for banqueting. Generally, people in antiquity did not sit in chairs to eat. They reclined on couches.

With this reference, several of the images in Thyatira can be put into perspective because they were linked to the use of a kline and its association with banquets. The most common banquets were hosted by organizations called voluntary associations, frequently referred to as trade guilds in modern writing. Christian and Jewish critics of these banquets noted the immorality and drunkenness that typified the meetings of voluntary associations. Most of these groups had secret rituals, to which Revelation derisively alludes with the phrase “Satan’s so-called deep secrets.” As in the story of Jezebel and Ahab, the overriding theme of all of these images is status, public honor and political power.

Reclining was a sign of higher status, in Jewish, Roman and Greek culture. The Jewish Passover meal was to be eaten reclining because reclining proclaimed “that they have gone out from slavery to freedom.” (Jerusalem Talmud Pesachim 10:1-3.1.3; see also Mishnah Pesahim 10:1; Babylonian Talmud Pesachim 99b and 108a) In Roman culture, reclining while others stood or sat was likewise considered a sign of prestige and privilege. (Katherine M. D. Dunbabin, The Roman Banquet, Images of Conviviality, p. 11) Artwork from the first century often shows two groups at a banquet, those of greater status reclining and those of lesser status sitting on chairs.

A typical private Roman banquet was held in a room specially designed for the purpose. The room, called a triclinium, was just large enough to accommodate three couches, one along each of three walls, placed on a slightly raised ledge. Each couch was usually designed with room for three people to recline. This effectively limited a typical banquet to nine people, though for public celebrations or for meetings of voluntary associations, much larger rooms were built with space for any number of couches, and some couches could hold four or five people.

Reclining was done by leaning on the left arm with the feet extended away from the center of the room. This meant banqueters reclined facing the back of the person next to him. This explains the reference at the Last Supper when the Apostle John leaned back on Jesus’ breast. (John 13:23) He was positioned in the space next to Jesus, moving counter-clockwise around the table. Food was placed on narrow tables next to the couches, leaving the center of the room open for servants and entertainers.

A very strict protocol governed the seating arrangements. In a triclinium, the three couches were designated highest, middle and lowest. The three places on each couch were likewise numbered. The place of honor was the third place on the middle couch. The first place on the lowest couch was the next honorable location and typically was reserved for the host.

Larger banquets utilized a more complex system of hierarchy, but the status of location was extremely important. A regulator was assigned the task of directing guests to their place, according to their rank or status. (Athenaeus, The Deipnosophists 4.21, 5.24, 7.34) Diogneses Laetius recounted a banquet at which the philosopher Aristippus offended Dionysius, the host, and was removed to the place of lowest honor. As he moved, Aristippus commented, “You must have wished to confer distinction on the last place.” (Lives of Eminent Philosophers 2.8.73) This is one of many examples in ancient literature of how aware everyone was of position in seating arrangements.

This was precisely the sort of occasion Jesus had in mind when he told his disciples not to take the place of honor, lest someone more distinguished come in and they be humiliated by being moved to a lesser seat. Instead, he told them to take the lowest place, so that the host might honor them by moving them up. (Luke 14:7-14) This was also what he had in mind when he accused the Pharisees of loving the place of honor at banquets. (Matthew 23:6; Luke 11:43)

The phrase “bed of suffering,” usually interpreted as a kind of witticism about turning a bed of adultery into a bed of suffering, was actually a reference to the status sought through banquet seating. The implication was that because leaders, in the spirit of Jezebel, would do anything to maintain their position of status or their place on the couch of highest honor, Jesus would turn their status into a source of suffering.

Next week we will further examine the voluntary associations. The political maneuvering associated with them was inseparable from the spirit of Jezebel.

What is a Bed of Suffering?
Tagged on: banqueting couch    bed of suffering    Jezebel    kline    spirit of Jezebel    Thyatira

2 thoughts on “What is a Bed of Suffering?”